They call me Moo

This was pre-internet, and also pre-massive hype for Angus beef. Some people knew about Angus Young (ACDC) but as a general rule, people were often sidetracked by my name.

I was young, and I was looking for a slogan, an image to set me apart from the bazillion other agents in town. A strategy to help people remember me.

I struggled with this until one day there was a computer box in the office from a little company called Gateway Computers (they exist in a different form now, but at one time they were the largest direct seller of personal computers in the US)..

They used cow spots on their  marketing materials.

Aha! I would use cow spot lettering (yes, I know.. Angus cattle are notably lacking in spots) and my slogan would be “your best mooove!” 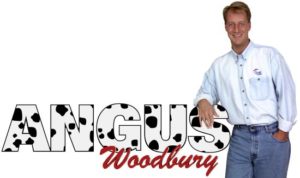 It was fun, so I ran with it.  Anything that I could do with cows to relate to the business, I did.

It worked!  I was involved in several national groups over the years, Allen Hainge’s CyberStars, The CyberProfessionals, Star Power and Floyd Wickman’s Master Sales Academy.. I became known as the “cow guy”.  Online, people and friends starting calling me “Moo” and it stuck.

It’s been more than 30 years, I’m not changing cows midstream